skip to main | skip to sidebar

From the IYA2009 Opening Ceremony Conference

As the Andorran SPoC, I am taking part at the IYA2009 Opening Ceremony Conference that is happening at the UNESCO Headquarters in Paris. This is one of the most prestigious conferences that I have ever been, featuring talks by Nobel prize winners and high profile astronomers and astrophysicist from all over the world. The number of attendants is also exceptional with more than 900 registered participants.
Of course, besides the numerous talks that fill most of the day, from 9am to 6pm, we get to enjoy some "cultural" activities like last night reception at the Palais de la Découverte, or tonight cocktail reception and concert by the Kronos Quartet.
Cheers for a succesfull IYA2009! 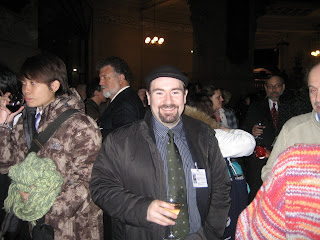 It was a busy day yesterday, mediatically speaking. I was interviewed 3 times, first by the Radio Nacional d'Andorra for the show "La Caravana", later by the Andorran TV during my talks at the Escola Andorrana de Segona Ensenyança and finally by El Periodic d'Andorra that will do their counter about me on Thursday.
The Andorran TV interview was one of the headlines of their 9pm news.
Posted by Joan-Marc Miralles Bellera at 9:15 AM No comments:

These first days of January are pretty busy for me. Next Monday, Jan 12, I have to give a pair of talks at the Escola Andorra de Segona Ensenyança de Santa Coloma, in what will be the first of a series that I will be doing during this year. These talks are for 2nd year students (13-14 years old), therefore I need to prepare them quite carefully to be able to reach them.

I feel it is more difficult to prepare a talk for kids or for the general public than a professional talk. You can assume, when you are among pairs, that they know as much as you about the subject, you can then concentrate on delivering exactly what you have been working on without caring much about what's beside. But for non-specialists, it becomes hard to feel at which level you should put the content of your talk, and it is hard to evaluate where that level is.

I go then through several drafts of the presentation and I try it on people around me (especially my wife) to see if they are able to understand at least part of what I am talking about. The subject of next week's talk is going to be "Research in Astronomy". I am going to talk about how astronomy has evolved in time, together with the observational and computational tools that we have been developping. I will try also to give the students a glimpse on how astronomers work nowadays and the challenges that we are facing at present times.

Keep tuned for more.
Posted by Joan-Marc Miralles Bellera at 11:18 AM No comments:

New Year Resolution: I will blog

Happy New Year 2009 everybody!!
I took the resolution of writing on my personal blog this year, following the example of the Cosmic Diary, a IYA2009 Cornerstone project,  that will bring to the public light the life of several astronomers around the globle through a group blog.
I am not going to be at the office until Monday, but I am keeping busy with the Andorra 2009, Any Internacional de l'Astronomia blog. I posted there today a picture of a sunrise that I took while observing at CFHT.
Besides that, New Year's day is a quiet day for me but with two strong traditions. The first of them is getting up early and enjoy the New Year's Concert by the Wiener Philarmoniker from Vienna. This year, it was directed by Daniel Baremboim which gave an excellent performance. I would rate it among one of the best of the last 10 years, with a superb selection of music and an amazing show by Baremboim.
The second tradition is watching the Ski Jumping Tournament from Garmisch-Partenkirchen, the second competition of the 4 Hills Tournament. This year they used a brand new jump and the winner was the Austrian Wolfgang Loitzl, in a thrilling finish with first-round leader and world cup leader swiss Simon Ammann who finished 2nd, less than 2 points away from the winner.
Posted by Joan-Marc Miralles Bellera at 5:02 PM No comments: